BJ Penn for Governor – For The People – End the Craziness 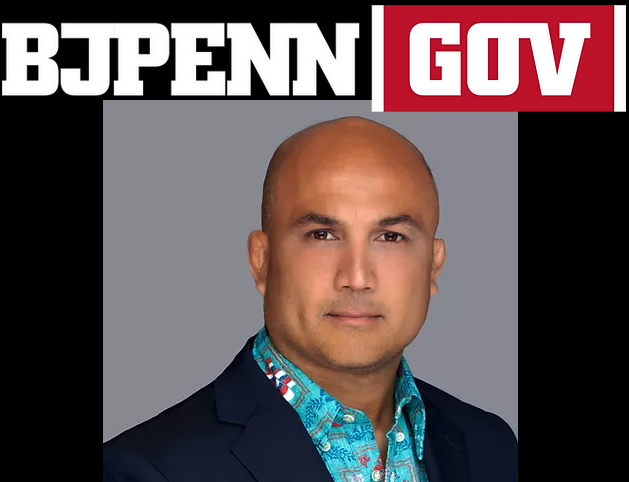 BJ Penn is best known as a former UFC Champion from Hawaii, but he is also a very successful business man – and advocate for the people of Hawaii. He is running for Governor of Hawaii as a Republican with common sense values – placing the people and lands of Hawaii FIRST! Join us in electing BJ Penn as the next Governor of Hawaii!

From the Friends of BJ Penn for Governor website:

BJ Penn was born locally on O’ahu and has proudly called the Island of Hawaii (Big Island) home since childhood. BJ is a father, business owner, farmer, investor, neighbor, and most known for his incredible achievements as the first American Gold medalist of the World Jiu-Jitsu Championship, and 2 x UFC World Champion. BJ’s drive to live a life of purpose and passion is rooted in his upbringing and the values instilled in his ohana. His mom is a businesswoman and politician, and his father honorably served in the U.S. Navy. BJ was taught from a very young age about the importance of politics and that freedom is something you have to be willing to fight and stand for.

His mother’s influence as a Native Hawaiian has allowed him to learn and understand the significance of preserving the land, for the people, for generations to come. BJ’s love for the aina goes beyond advocacy and policy reform, he enjoys rolling up his sleeves as a taro farmer and wants to make farming education and sustainable food sources more accessible. As a friend and neighbor, BJ is concerned about the health, protection, and freedoms of all who call Hawaii home. He feels identifying safe and effective healthcare options and having access to natural resources is essential.

BJ is a father to four precious children, three daughters, and one son. His children and family inspire him every day to make the local community, and the world, a better place. He is dedicated to making sure children are protected and have access to quality education, without barriers. BJ wants every child to reach their full potential, regardless of demographics related to age, race, location, or upbringing.

Courage, compassion, respect, fearlessness, honor, perseverance, dependability, loyalty, honesty, and commitment, are the core values BJ was raised to adhere to, and he feels these are all characteristics the governor of Hawaii should not lack.
BJ announced his intention to run for governor of Hawaii with a sincere request to welcome all local conservatives, liberals, moderates, and independents to join his movement to put the people of Hawaii first.

BJ Penn is dedicated to fearlessly fighting for the people of Hawaii, with respect, honor, and aloha.